New characters – some pop out fully formed, some are dragged out kicking and screaming 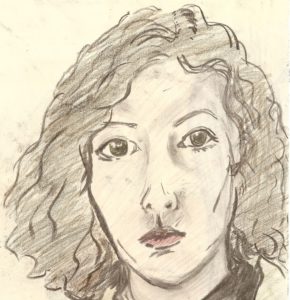 The image that inspired Renia – art by Susan Martin

The first 3 books have characters that I’ve been living with for a very long time, though getting a book print ready does help you to learn a lot more as the final bits fall into place. (Yes, Playing a Dark Game is coming along nicely, thank you. I may even make the publishing deadline, with luck and a following wind).

Book 4 is a different matter. It only has a working title still, and though I know basically where the plot’s going, several of the main characters are very raw and proving hard to pin down. Sometimes it feels like trying to sculpt custard. It takes me back to my early days of writing, which is both exciting and infuriating. I remember how long it took to get Kerin to the point where a sensible girl with self esteem (i.e. Renia) would fall in love with him – it’s not easy to like him when you find yourself writing a scene and then rolling your eyes at whatever he’s done this time.

I’ve resorted to an old trick: I have a conversation out loud with the tricky characters about the things that puzzle me or won’t come clear. I have to do both sides of the conversation.* and much of what comes out may never be used, but with luck it generates some usable dialogue.

If only Jesral had as many chats with Kerin as I did, she’d probably understand him a lot better than she does by the end of Restoring the Light.

Cedas on the other hand fell onto the page with no effort and he always comes out with the best lines, but apart from mentions of a mercenary background he’s incredibly cagey about his back story. I’m not sure if we’re ever going to get to the bottom of him, but then that’s part of his charm.

Or not, if you’re Jesral.

OK. Jesral doesn’t understand men. Let’s leave it at that.

* This is fine if you’re hunched over your laptop at home and the kids and hubby are used to the Gollum-esque conversations you hold. They may even offer you tea while you’re at it. Avoid doing it on public transport though. At best people tend to sidle away. At worst they call the police.

BUY SHADOWLESS AS AN E-BOOK, GET RESTORING THE LIGHT FREE!

So, you already have a copy of Shadowless or are thinking of getting it? Your support is really appreciated, and to say thank you I’d like to offer you Restoring the Light for free. Just click on the SPECIAL OFFERS… tab above.
Don’t do e-books? No problem. Go to SPECIAL OFFERS… and add PAPERBACK to the comments section, we can have a chat about a coming offer.