I used to work for a software company, and as part of the design process we used to build a product so far, then get our partners to ‘gunsling’ it to see it they liked it, could break it or could find any bugs. (Yep, it was an American company.) Back then it wasn’t a conventional approach to take, letting your customers loose on the goods before they were finished, but BSI the (British Standards Institute) signed off on the process and were mightily impressed by how happy these beta testers were at being involved and how few bugs remained after.

Book 3, Playing a Dark Game is due out late 2017, but for this book I’d like to enlist some of you as beta readers. This means you’ll get to see the story well in advance of the release date, but not quite the finished version. You’ll have a chance to say what you like and what you don’t, yell if you think there’s a glitch or plot hole, or if someone seems to be acting out of character.

You’ll need to have time free to read it (it’s around 120k words) during a yet-to-be-confirmed month between Xmas 2016 and Easter 2017, and agree to keep a lid on what happens. You may have read books one and two already, or you can come at it blind to what’s happened before, either’s good.

A free copy of the finished book will be the reward for your efforts!

I’ll need to limit numbers to manage everyone’s input, so if you fancy getting involved, put your name down sooner rather than later. (The Resume paragraph is optional but could increase your chances of being picked.) 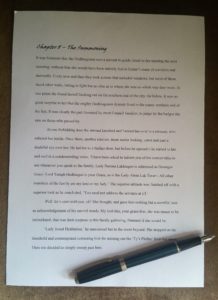