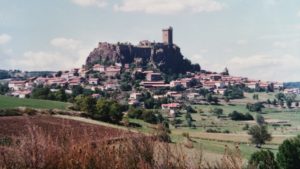 I’m still working on that map, in between writing Book 3 and marketing the last two. Now you lovely people have finished recommending it to all your booky friends sales have slowed, so I’m busy drumming up more interest! But I haven’t forgotten my promise to existing readers, so here goes… The last blog covered locations in Shadowless and now it’s time to catch up on where we are in Book 2, Restoring the Light.
You know (from the last blog) we’re starting off in Luxembourg. Our heroes are heading south; it’s not detailed in the book but Kerin is trying to make sure they stay west of Nancy and Dijon. The aim is to keep west of the Moselle to avoid having to cross too many rivers. The trouble is, they end up going further west than they realise. As a result they reach the Loire, somewhere south of Roanne, where they take shelter at Penor-Hed’s farm (Chapter 2 – Refuge).
After an idyllic summer, an incident at the farm forces them to go on the run again. They take two different routes – on purpose this time, not like in Shadowless.
Vel, Kerin and Jesral take one of the horses Cedas gave them and two from their assailants, cross the Loire and go almost due south across the eastern Massif Central (the current day Parc Livradois-Forez). They wait, deep in the hills north of Lestar, for Penor-Hed to catch up with them on Cedas’ remaining horse (Chapter 9 – No Wrong without a Remedy).
Meanwhile Jastur, Renia and Penor take a stage coach south-east to Vienne, where they catch a barge down the Rhône to Valence then walk west for a day before catching another stage coach into Lestar from some obscure hill town – somewhere like Lemastre (Chapter 10 – Trust).
And Lestar itself? It’s based on the town of Polignac near Le Puy-en-Velay in the Auvergne. It’s built around a volcanic plug that rises out of the valley, with a ruined fortress on top (see the picture above). The tower is not mentioned in the story, as the fortress walls and interior have been rebuilt around it. As you can see, the town really does sprawl and clamber round the fort – it’s bigger and sprawlier still when the book is set.
A bit of artistic licence is required next, as the geographical inspiration for Aravey (Chapter 20 – Pursuit) and Mylos (Chapter 21 – The Challenge) are at least a day’s ride away, while in the book they manage the journey in barely half a day.
Lac d’Issarlès in the Ardeche conveys some of the geography of Aravey, though the lake at Aravey is smaller and more irregular. The fort of Aravey owes much of its outside appearance to Stokesay Castle in Shropshire and inside, a lot to Le Castellas in St Bonnet du Salindrinque (a beautiful castle much further south, in the Cevennes). You can even rent yourself a wing for a holiday at a surprisingly reasonable price – as long as you don’t mind the walk to the third floor! Meanwhile the waterfall at Mylos is inspired by le Cascade du Ray Pic, and the fictional house at Mylos sits on what is currently a car park nearby, but looks very like Gwydir Castle in Llanrwst, Wales.
I’m putting some ‘mood boards’ up for each book on Pinterest (Shadowless is up already and being added to whenever I come across an image that speaks of the story to me).

I’d love to share your vision of the places in the stories with everyone there too. Please take a look – and if you have a comment, or would like to send your own photo or drawing to go on one of the Pinterest boards (check it is copyright free please!) let me know below.