I’ve got to get a map made up… 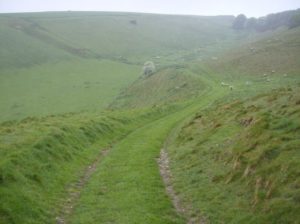 Yup, I’m still not organised enough to have a map sorted, but in the meantime happy to fill you in or where we’ve been wandering from/to in the Ilmaen Quartet. I’ll start with Shadowless and do Restoring the Light in another blog. I may even hint at where we’re going in future too…

You’re starting off in Dorset.
To anyone who deduced ‘There are Welsh names. They speak a bit of Welsh at the start. We’re in Wales!’ …Nope.
Granted you know Ireland (Federin) is to the west (Ch3), and the Ty’r Athre cliff home is built into sandstone (Ch2). Yes, there is sandstone along the Pembrokeshire coast, but there is greensand on the Jurassic coast, particularly around Golden Cap, and you know the nearest town is called Dorster (Ch2). That’s Dorchester, and the village referred to (Ch1 and later) is Bridport.

What are the Welsh doing in Dorset in such numbers? Ah, history. Just before the Catastrophe pretty much everyone who wasn’t fabulously rich or dirt poor lived in a city (start reading the free prequel Telemache here for more information), and we know the cities were all destroyed. The city far to the east of the village had been called Hampton (Ch1) – that’s current day Southampton. With much of Britain (which is exactly how you pronounce Mrhydain) now empty of people and unpoliced after the the Catastrophe, those in Wales, rich and poor alike, began to move east and south to take over the empty land.

The day Renia has her first vision of Jastur (Ch6), they take a long ride out and visit a cove. This is an imagined location, but the inspiration for this is Lulworth Cove. As a child it was a magical place. I’ve not been back as an adult but can only hope it retains its strange duality, a combination of all-embracing, cosy isolation under soaring wide-open skies.

The High Plains and the Three Villages (Ch7 and 8) are also imaginary. The Three villages are in a setting somewhere like Toller Whelme or Compton Valance, only fallen on much harder times so they’re not such pretty hamlets.

And by now you’ve probably sussed that Greatharbour (Ch11) is the town of Poole. So let’s board a ship and head out of port.

You wind up in France, but not where they originally planned.
You can sound out for yourself where their intended Eastern Ilmaen destination of Beloin is (Ch11), but that goes out of the window when the storm strikes. Though it comes up from the southwest, it forces the Dawn Wind to try and head south of it before it hits, and the prevailing (clockwise) wind direction on the front edge of the storm when it does catch them also drives the ship south. As a result they end up in current day Ouistram (Ch13).

Now they take two different routes for a time, the girls along the coast road and the men turning inland. Once they talk Cedas into heading for Karn too, girls follow a route roughly on the level of Rouen to Rheims; the men take a route only ten miles or so further south, but it takes them across the northern edge of the citywild that was once Paris, about level with Évreux and Épernay. They meet up again somewhere near the current Champagne/Alsace-Lorraine border.

A quick trip into Luxembourg…
And we reach Karn. Another imaginary place, whose look and feel was inspired by a number of British and European castle towns including Ludlow, but the nearest to its actual location is Vianden in Luxembourg.

So that’s your locations for Shadowless. Stop off at my blog again, or sign up for updates (bottom right) to see where Book 2 takes us!