Should Amazon have a ‘YA/Crossover’ Category? 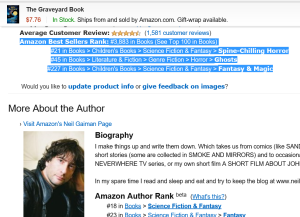 Writers and publishers often struggle with how best to bill their latest creation so that likely fans of that genre can find it.

Meanwhile, readers are faced with a wonderland of books, wanting an easy way to filter down to THAT perfect book, the one that will really reward the time and money spent reading it.

Neither side wants to miss out just because the bookshops and newspapers aren’t raving about THAT book!

As a YA writer who is seriously west of her 20s (and seems to have a lot of fans who are too), and given I read a lot of YA for fun myself, I’ve often wondered whether there’s any mileage in having a YA/Crossover category. There are so many great writers with work that fits here – CJ Cherryh, Philip Pullman, Ursula LeGuin, Neil Gaiman, Connie Willis, Terry Pratchett, Cassandra Clare to name but a few. Yet take a look at their work and categories and you’d understand why you might end up knowing some of these names but not others, despite all of them being award winning and/or #1 best-selling writers.

Would a YA/Crossover category be your first point of call as a reader, if it existed? Or do you think it would be used and abused by us writers/publishers after a bigger share of the market, till it became unusable?

I’m not sure so that’s why I’ve started a discussion, here and on Facebook and Twitter. If you’d rather keep it low key you can post your thoughts here. If you want social media (and suppliers like Amazon) to know your thoughts and make a change right now – heck, get it out there at:
Facebook helenbellauthor
Twitter helenbellauthor #YAcrossover

3 commments on “Should Amazon have a ‘YA/Crossover’ Category?”