Now the party’s over… 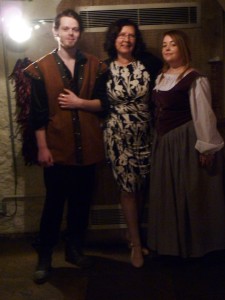 Thanks to everyone who came to the book relaunch party, I had a great time myself (luckily I was too busy to be nervous as I’d feared I might!) and hope you enjoyed yourselves too.

A big thank you to Bill’s staff, who did us proud with the setting and kept us well fed and watered all the way through.

For those of you who couldn’t make it, your reviewer’s perks have been retained for a future event or offer, never worry!

Just a couple of photos from the night:

At top right, me with Vel and Jesral, or as they are known to their friends, Duncan and Cara.
Thanks for dressing up and being the characters for the night, you two. Given the usual banter that goes on between you, you were a natural choice. 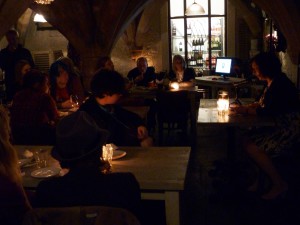 And below that, an atmospheric reading from Restoring the Light in the crypt at Bill’s Restaurant, Guildford.

It was quite a dramatic scene I read out, and at one point when I paused, I could have heard a pin drop. I’ve got them hooked! I thought excitedly and read on; only to be told later that at the back, the silence might have been from people trying to hear over the music from the restaurant upstairs.

So, now the party’s over, what next?

Work on Book 3 continues, but in the meantime there seem to be two burning questions from readers.

First is, “Where are we and can we have a map?”
I made a start explaining things in an earlier blog but I’ll revisit that in a coming blog. I might attempt a map too but no laughing, I’m not that artistic.

The other one is, “Where did Eivarjoa (the Shadowless or witches) come from and what disaster did (or didn’t they) cause?”
I’ll be answering that, at least in part, by uploading a bit of an an as yet unpublished prequel, Telemache, to set the scene four and a half centuries before the events of Books 1 and 2. Add your email to the Contact Me group (see the website toolbar at the top of this page) and I’ll send you a link when it’s live.

And as an extra treat, I piloted an animated Facebook/Twitter advert at the party complete with music, I’ll let the Contact Me group know when that’s finished and out too.

Till then, keep speculating on where Book 3 will take us because I’m afraid it’s still a while away. I’m writing as fast as I can, honest!